The Joys of Truffade

Last summer when travelling through the Auvergne, I discovered truffade, and it became a bit of an obsession. It’s a local speciality, which is served with most dishes in most restaurants, and I became fixated with finding the best truffade I possibly could, on every possible occasion. I even ate it by the pool in Belieau.

The first time I tasted it was in Mauriac - a lovely little town about 20 miles north of Aurillac. I was walking through a farmer's market in the square when I was captivated by an incredible smell of frying herbs and garlic. The source of the smell was a cauldron bubbling with a pale, coagulated goo, stirred by a French lady not dissimilar in appearance to an elderly uncle of mine.

“Mademoiselle, mange ce truffade délicieux - c'est la spécialité de l'auvergne,” she croaked. Before I had much of a chance to enquire as to what, exactly truffade was, she had thrust a paper cup of the warm stuff into my hand.

I wasn’t complaining – it tasted devilish. Being a person with much more of a savoury disposition than a sweet tooth, this was my idea of the perfect snack. To put it crudely, truffade is a cross between a potato pancake and mashed potato, loaded with melted Tomme cheese, garlic, fried onion and an abundance of herbs and butter. Its texture and the way it is served varies from place to place – sometimes its more like a potato cake made of clearly sliced, sautéed spuds, and other places serve it like a roughly mashed potato, which is my personal favourite. Sometimes they add lardons to this.

When melted, Tomme, (a mild cow’s milk made in the Alps), goes stringy and is somewhere between gruyere and mozzarella. The cheese and potato often stick to the bottom of the pan where they brown, crisp, and sometimes burn. This is then scraped from the bottom of the pan and stirred in with the rest of the mixture, giving the whole dish an irresistible crunch. 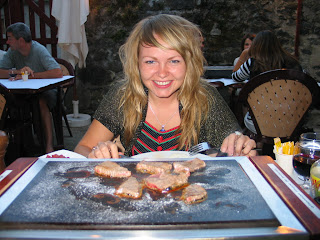 My most memorable truffade experience was at a fantastic restaurant called Le Drac in the small town of Salers. Salers is about as scenic as you can hope to find in a ridiculously scenic region. It’s high up, characterised by cobbled, sloping streets, archaic architecture and an incredible view across the valleys. Le Drac is a bar-cum-restaurant with some of the friendliest service we encountered and alfresco dining in the courtyard out the back.

We ordered a pierrade, which is a hot rock that they plug in at your table, for you to cook your own meat on. The meat we were served was an incredible cut, with no gristle or fat, and meltingly tender. It came with a quartet of different sauces - red wine jus, béarnaise, dijon and blue cheese, and a huge mound of truffade.

I don’t know whether it was the tenderness of the meat, or the way they had made the truffade – but this was certainly one of the best, and memorable meals of my life -hence the fact I find myself writing about it now. So if you’re ever in the region, and find yourself driving through Salers, go to Le Drac and eat as much truffade as you can stomach.

On a recent trip to Waitrose I was overjoyed to discover that they sell Tomme cheese, meaning that I was able to recreate the indulgence of my holiday (be warned – I put on four pounds in two weeks) in my own kitchen. Not having managed to get a recipe on my travels, all I had was my memories and a picture postcard, from which I derived my very own truffade recipe. I can’t vouch for its authenticity, but it tasted spot on.

Here’s my recipe for truffade:

Method
1. Slice the potatoes to the thickness of a pound coin and par-boil in salted water for six minutes. While this is boiling melt half the butter in the pan and add the herbs, garlic and then the onion. Sweat on a low heat for a few minutes, until the onions are soft. Drain the potatoes and add them to the frying pan, breaking them up ever so slightly with a wooden spoon. Add the rest of the butter and the Tomme and cook for another ten to fifteen minutes, stirring the mixture together and scraping the bits that stick to the bottom into the middle. Season generously with salt and pepper.

Serve with a steak and a green salad.