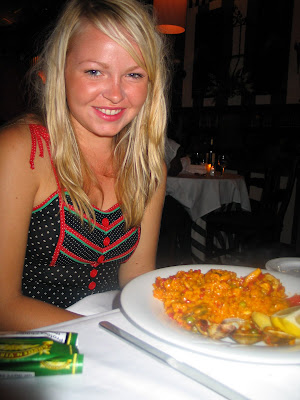 "Never was a dish so misunderstood, so misrepresented, so abused as paella," writes Paul Richardson in his paean to Spanish food, A Late Dinner. "The crimes committed in the name of the Spanish national dish are horrible to relate," he says. And if you've ever fallen prey, as I have, to a bad paella - you'll understand. All too often the dish is an unfortunate affair, boasting atrocities such as reheated, frozen seafood mix, turmeric where there should be saffron, and tough lumps of battery chicken.

Though paella originated in Valencia, and the authentic dish of paella valenciana contained rabbit, snails, chicken and beans rather than any seafood, the dish that populates the common conscience is one of fat, juicy prawns, mussels and squid rings. Delicious when done right, horrendous when bastardised.

A recent voyage into the sunny climes of the Costa del Sol, (Puerto Banus to be exact) was a holiday more appreciated for its sun and free accommodation than for its culinary feats, but, one night gave way to a supper of paella so perfect and unexpected it left me preoccupied for days on end.

We found The Waterfront sandwiched between the Italians, Gucci stores and Burberry adverts on the jetty overlooking the boats and were attracted to it because it seemed to be the only restaurant for a twenty mile radius to be serving anything near Spanish fare. It also had a very reasonable 15 euro, 3 course set menu which was the best value in town. After a sizzling starter of gambas pil pil, the paella for two arrived, to be served table-side with precision which ensured that each plate received an equal helping of mussels, squid, clams and prawns.

It had been one of those orders made tentatively, the grim visions of Richardson's only too accurate musings flitting around my head. This restaurant was a honeypot used to serving the not particularly discerning expats who are happy to order chicken casserole or roast beef on a meal out. Would our paella turn out to be a mush of fishy smelling, rubbery squid rings and rancid chicken? I needn't have worried.

The steaming mounds of rice were a luscious orange, fragrant with saffron, the prawns were plump and fresh, as were the mussels, clams and cockles that came away from their shells with ease and melted on the tongue. The chicken was tender and delicate and the squid was utterly delicious.

This was unexpectedly the closest I've come to a perfect paella experience in a long time. What was yours?
Posted by Food Fiend at 09:25 No comments: