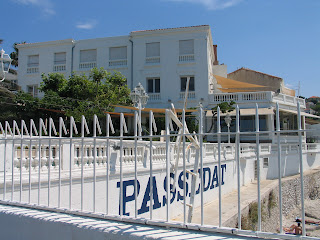 Perched on a rock, rising out of the transparent, turquoise sea on the coast of Marseille is Gerald Passedat’s gleaming white, neo greek villa and three Michelin starred restaurant Le Petit Nice.

The site itself resembles something from a Bond film – its sprawling terrace with pretty white lamp-posts, neat green hedges and sparkling swimming pool overlooking the lapping waves - a place for the ultimate pleasure seeker. On my visit it is, as is surely characteristic of this restaurant with rooms, awash with Marseille’s beautiful people – women with expensive bags, curling cigarette smoke and men in spruce linen suits. 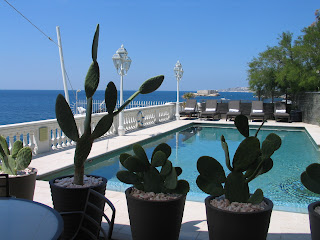 I’m here with Chris Galvin, and his Windows restaurant team - manager Fred and head chef Andre, who are hoping to glean some inspiration from Passedat’s infamous 14 course seafood tasting menu. Earlier in the day we had managed a brief and somewhat frosty meeting with the man himself, who talked of the restaurant’s 90 year heritage. It was opened by his grandfather, and then run by his father before him who won the restaurant its first prize star in 1979 and a second in 1981. Passedat, who was born in the villa, but only took over the kitchen in 1990, this year became the only new three-star chef in the 2008 Michelin Red Guide.

An imposing figure in his crisp, immaculate whites, Passedat spoke of his belief in respecting his staff, his produce and nature – and revealed himself as a reformed traditionalist after years spent over-complicating food, whose strong relationships with local suppliers inspires and informs his cooking. As you’d expect from a restaurant with such a history, he knows everyone on the local food scene, and is happy to trust the local fisherman to bring back produce for him to use.

His menus focus predominantly on fish and seafood from the local vicinity, and he uses what he calls “Forgotten fish,” like denti (a local, fleshy, bass-like fish), tub gurnard and red scorpion fish. His cooking evokes the classicism perfected and passed down through the generations in Le Petit Nice’s 90 year history, but also relies on technical brilliance and progressive flavour combinations pioneered by him. 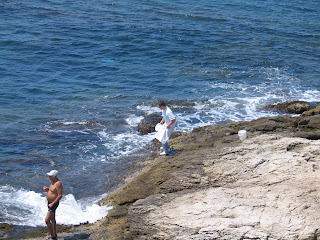 He tells us that his cooking is "simple, instinctive and classic" and that he does not believe in molecular gastronomy as it interferes too much with the ingredients – pointing out that lots of the protein glues used in this kind of cooking stick to the stomach. He says that his food is "not typical of Provencal Marseille cooking" but that he pays homage to some traditions - something you can see on his menu in his interpretation of the legendary local Bouillabaisse. Passedat's version uses seven fish and shellfish that vary depending on the day's catch, served with a "nectar of rockfish" and a spoonful of rice.

“They’re like film stars, these three star boys,” says Galvin with a slightly deflated sounding awe, after we finish our chat with the chef, whose brilliance and intense focus is, we hope, cause for his seemingly stand-offish demeanour.
Posted by Food Fiend at 05:12

god, it's a tough life rosie.
hope you're enjoying it. xx