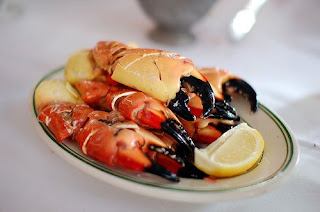 Rarely have I seen my boyfriend happier than on Friday night when I presented him with a big hunk of steak, some oven chips and a crème fraiche and Portobello mushroom sauce.

“This is one of your best,” he smiled, chomping as the grey sauce dribbled down his chin. My heart sank as I remembered all those complex, slaved-over compositions: the spatchcock chicken and fennel and cannelli bean stew, the pancetta and blue cheese risotto and the perfectly spiced curries.

“If all I have to do to please you is whack the best part of a cow on a griddle pan for a few minutes and shove some chips in the oven, then why do I bother?” I thought.

And then it hit me. I bother to woo him with such fripperies, such lovingly crafted dishes partly because I’m a feeder, and like an appreciative dining partner (which he inevitably is) but also because I have a fixated, almost Machiavellian relationship with food.

A bit like Jamie Oliver and Hugh Fearnley-Whittingstall, who insist on feeding capers, river trout and celeriac to families on low incomes, I insist on feeding soufflés, shellfish and star anise to a man who would be quite happy with a Fray Bentos. 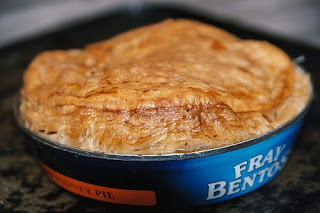 And so it came to be that when we went out for a meal on Saturday night we ended up not in his curry house of choice, but in an Indian seafood restaurant, Rasa Samudra on Charlotte Street. There wasn’t any meat on the menu, and we ordered a crab and fish dish to share.

This meal was to be his treat, and, being a Yorkshireman through and through, he’s not exactly profligate with the cash. That’s not me making a hideous generalisation by the way – that's his words precisely. “I can’t help being tight – I’m a Yorkshireman.”

After a shared (ahem) starter of lightly spiced, deep fried aubergine with a tomato and coriander chutney, our mains came. And the portions were a little on the light side. Make that a lot on the light side. Tucking into the crab dish, we found ourselves with precisely two claws each, and, lovely as they were in their onion, mustard seed and green chilli accompaniment, it wouldn’t have been enough to satiate someone with half the gaping stomach capacity of me, and certainly didn’t justify the £12.75 price tag.

Stubborn as I am, I decided to avoid having that 'I-told-you-this-poncey-seafood-place-would-be-a-rip-off' conversation and ignore said small portion. Instead I chowed down on some serious chapatti. Jim, it seems, decided to fill up on Cobra.

What happened next is as predictable as it is absurd. We had a row.

“It’s too bloody hot in here,” he snarled.

“Well take off your jumper then, you fool,” I hissed back.

“I don’t want to do that. It’s just too hot in here, it’s unacceptable,” he crooned.

“Don’t sit here and complain that you’re hot, when you’re sweltering in that woolly jumper,” I winced.

And so it went on. But what I didn’t realise at the time, when I was deriding Jim for his seemingly idiotic refusal to derobe, was that it wasn’t the jumper making him hot, it was anger. Anger at me, for my censorious way with food, anger at the restaurant for their small portions, and anger at himself, because the thought of a £50+ end-bill was making him sweat.
Posted by Food Fiend at 12:16

Hi there, we're currently looking for talented home cooks with interesting family recipes to take part in a brand new cookery show for ITV if you're interested?

if so drop me a line